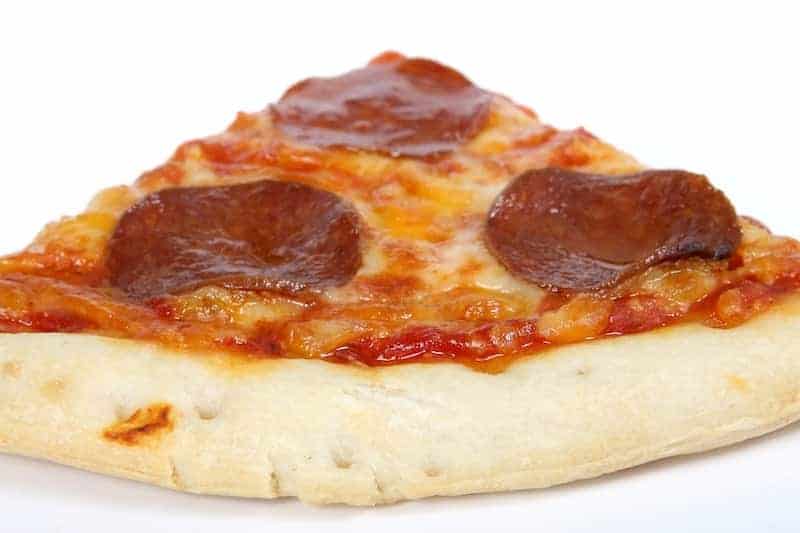 I know, many people struggle with pizza dough; their results are often too thick and very bready. It is almost impossible for them to make the dough thin and crispy as well.

The main reason behind this is your ‘Strong Gluten Flour’. Pizzas made with high gluten flour have a taste like bread. They are good for many occasions, but not great for the pizzas.

It is because they have a high percentage of protein, 12 to 14. It affects its taste on a massive scale. Moreover, they are known for absorbing more liquid. That’s why the dough outcome for pizza isn’t great. It is often very thick and bready and used for those products that require more structure, like yeast bread.

If the dough spreads or rises upwards, it also means the strong gluten flour is responsible for that. It doesn’t let the dough spread outwards and also gives the taste of bread.

Use the ‘Weak Flour’

In the weak flour, the gluten content is low which results in a loaf with a finer, crumbly texture. It is perfect for making pizza dough as the protein content is only 9%-10%. Thus, it doesn’t taste like bread either. It is the same kind of flour which is used in biscuits and cakes.

Also, try to use less yeast. Because if you use too much yeast in pizza dough, it can affect the bread by adding a yeasty taste.

According to experts, the general amount of yeast in a pizza dough is around 1%-2% of the flour. If you will exceed this ratio, the dough won’t let the flour to expand and ultimately deflate or rise poorly in the oven.

You can try a different type of yeast if the amount of yeast isn’t changing the taste of pizza dough. For example, if you are using the fresh yeast, which is probably the liveliest of the yeast type, try something different instead, like Instant Yeast.

It is a bit different; you add it to the dry ingredients of your dough.

This simple change can also facilitate you in changing the taste.

We have some other yeast types as well like ‘Active Dry Yeast’. It is also known as shelf-stable yeast and it is required to dissolve it in water before its usage. Apart from this, there is a sourdough starter; it is rather common and can be found nearly anywhere.

Experimenting with these different kinds of yeast can definitely facilitate you in having the taste you want in your pizza dough.

I know some people try to make pizza yeast-free to avoid the bread-like taste.

It is possible to make pizza without yeast and many people do that, however, it is usually for those who are on a yeast-free diet or they are allergic to it.

The reason why people avoid using yeast is it is often used to make bread and other baked goods. Most people believe this is the main reason why the pizza dough tastes like bread, not the kind of flour which people try to change often to have a different taste.

What one should use to change the taste instead of yeast?

Well, this can be substituted with baking soda, yogurt, or buttermilk.

Some people try self-rising flour too, which is also quite effective in making pizza dough. It is not utterly an equal substitution for yeast but it is a good choice.

It gives the lift you need in your dough and it has a low protein content profile as well which prevents the taste like bread. The only downside of this flour is it makes the pizza dough more fragile and crumbly, which is probably not desired by some people.

It is ideal for those who are more into thin-crust pizza, as it is without rising or any kind of texture and its dough doesn’t taste like bread either.

In case it is hard to self-rising flour, you can use the regular flour too for making the dough. All you need is to add more water into it to make it soft and smooth, not sticky. It would be easier for you to make it 1/2″ thick while making pizza and will give the same thin-crust look like the self-rising flour. The only thing you need to ensure is you aren’t using flour which has strong gluten properties. Otherwise, even with the thin crust, you will have the flavor of the bread.

All of these strategies work.

But if nothing is working and you are struggling with the same dough taste issue, first try changing your recipe. Besides, modify a few other things too.

For example, use more flour and less water to play with different kinds of dough. Second, try to preheat the stone too, because some stones are meant to be preheated. This one change can hand you crisp/firm bottom on the crust and won’t let the dough become bready for your taste.

You can also be careful about the rise of the dough.

I have seen that some people don’t let the dough rise before stealing it.

This is a big mistake.

You must make it rise once before freezing it. This will give you many advantages, such as your dough will become much more manageable and light.

It will have a different taste if you aren’t already following this strategy.

Lastly, if nothing is working, ponder your recipe. Check your recipe on the pizza calculator. Hydration should be around 61%. With minimal yeast, these values work the best and prevent your pizza dough taste like bread.