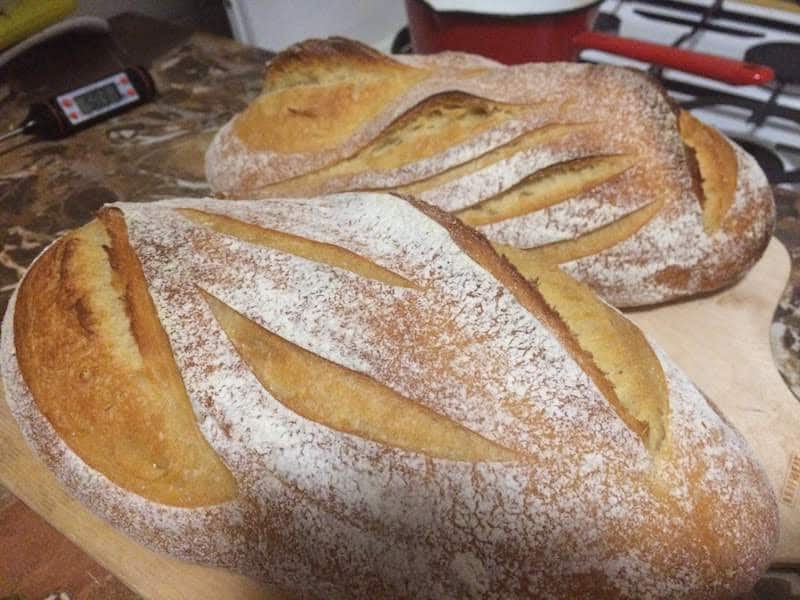 Sourdough bread is popular for a number of reasons. It is arguably healthier than conventional white bread. It brings with it natural probiotics. It is easier to make because it doesn’t need yeast to rise.

Use a thermometer that relies on a sensor plunged into the heart of the loaf to verify the temperature and that the bread is indeed done.

This article may contain affiliate links. As an Amazon Associate, I earn from qualifying purchases. Please take that into account.

Extra (nice to have):

👉Learn how to make bread and pizza with this awesome book.

Why Is This Temperature Different than the Ones I’ve Heard for Other Breads?

Sourdough is considered a lean dough. Lean doughs are done when the internal temperature is between 190 and 210 degrees F. Rich dough breads will be done at 180 to 190 degrees F or 82 to 88 degrees Celsius.

How Long Does Sourdough Bread Need to Cook?

Sourdough bread typically needs to be cooked for 25 to 30 minutes. The cook time will depend on the size of the loaf. The biggest factor is getting the bread to the necessary internal temperature. More on that later.

How Hot Should the Oven Be to Bake Sourdough Bread?

You should preheat your oven to 450 degrees F or 232 degrees C if you’ll be cooking it in an earthenware pot. Reduce the temperature to 400 degrees F or 204 degrees Celsius and pop in your sourdough bread.

By heating up the oven before you open up the door to add the dough, you ensure the oven is hot enough to cook it and that you’ll have even heating of the bread.

Cook the bread for around 20 minutes with your lid on, such as when you’re cooking in a Dutch oven. This helps seal the moisture in. Remove the lid. The bread will be light and shiny at this point.

Bake it uncovered for about 40 more minutes to fully cook it. The time frame will vary based on the container you use and the size of the loaf. The goal is to get the interior bread hot enough to be done.

What if you’re cooking sourdough bread inside a lidded, cast iron pot? Preheat the oven to 500 degrees F or 260 degrees Celsius. The iron pot helps keep the bread very moist. That helps give the bread a crisp, golden and glossy crust you see at artisanal bakeries.

In this case, you’ll turn the oven down to 475 degrees F or 246 degrees Celsius and pop the pot in the oven. It will still need around 20 minutes to cook.

How Can You Tell Sourdough Bread Is Done?

I’d say to use an instant-read thermometer and to verify that the bread reaches the necessary internal temperature, 190 degrees F. Ideally, the bread will be done when it hits 205 degrees F on the inside, not when it is dark brown.

This is because the loaves probably won’t brown very much, though this depends on how much you let it rise.
You can open the oven door just a crack to let some of the moisture escape.

That will create a crisper crust. For an even crispier exterior, take it out of the pot and let it bake directly on the rack for the last 40 minutes. Cook time and temperatures don’t affect the texture as much as how much opportunity the bread has to essentially dry out.

Will I Need to Cook Bread Long Enough to Kill the Sourdough Starter?

Sourdough starter is a live culture created from the original sourdough wild yeast and bacteria. You add water and flour to feed it. Then divide the mix.

The mix will need anywhere from two to ten hours to double in size and be ready to mix into the bread dough to help it rise. However, this is only true if you’re making and maintaining your own sourdough starter. You can buy starters, too. Those have to be fed, and you can add it to the bread dough when active.

You’ll know it is active because it will bubble similar to proofed yeast.
The sourdough starter can be kept at room temperature if you’re baking with it often. Or you can keep it in the fridge and “feed” it once a week.

The wild yeast and bacteria in the sourdough starter will be killed at the same temperature that conventional baker’s yeast dies. That is 140 degrees Fahrenheit or 60 degrees Celsius. You can actually kill the yeast by adding water that’s near boiling but well before you hit the set baking temperature in your oven.

Does a Gummy Interior Mean I Didn’t Cook It Long Enough or Hot Enough?

Suppose you’ve baked the bread and hit the 190 degrees F for half an hour or hit the 205 degrees F mark. You’ve taken it out of the oven to cool.

If you cut it immediately, you’ll get a gummy texture. This isn’t because you undercooked the sourdough bread. Instead, it is because you didn’t give it enough time to cool and essentially dry as moisture escaped from it. Put the bread on a wire rack to cool off. Wait at least an hour before you slice it.

Note that the bread can dry out if you just leave it out for hours after you bake it. This is why putting it in a plastic bag, covering it with a cloth or putting it in a breadbox is necessary to maintain the temperature after you’ve made it.

At the same time, the bread isn’t really done because it has dried out to the consistency of a cracker. Take care to make sure the bread is hot enough long enough to be done, and then take it out of the oven.