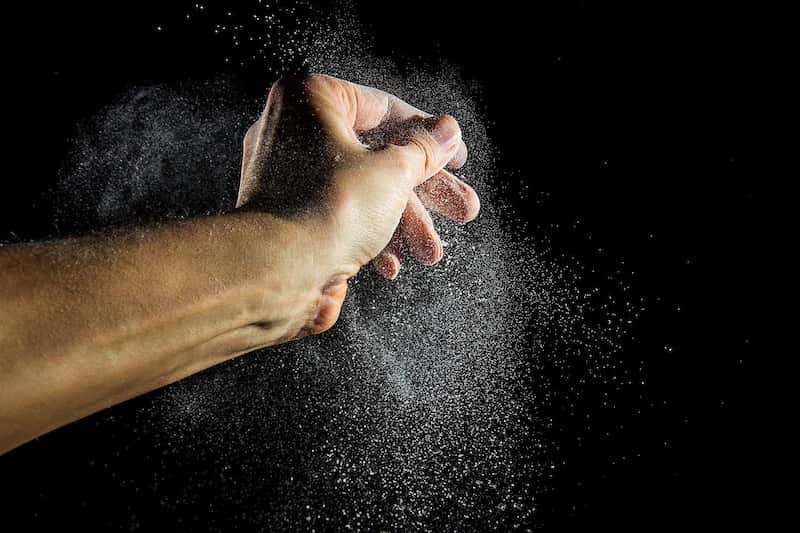 Dusting the bread isn’t an accident. It is typically intentional. We’ll share a number of reasons why people dust bread with flour before baking.

What is the purpose of dusting bread with flour before baking? The main reason is that it prevents dough from sticking to a surface. That makes it easier to divide and shape the bread without it losing its shape. It is for this reason that tables are dusted before people roll out dough for pie crusts, too. It is easier to pull the dough off without it sticking like play-dough or tape to the surface.

How do you dust the work surface with flour?

Dusting by hand is simple. You’ll want to pick up a small amount of flour and flick it around the surface by hand, though there are sifters, too. You don’t want to cover the work surface so that it is covered as if with snow.

You don’t want to waste flour this way, and too much can leave gritty flour on the bread. This is true if you dust the breadbasket, as well.

When do you want to dust the work surface with flour?

It should certainly be done before you’re kneading the dough. It may need to be done again before you put the dough down to rise. It is your decision whether or not you roll the dough on a floured surface so that both sides are equally “dusted”.

Dusting the container you bake the bread in will help prevent the bread from sticking to it. That makes it easier to remove from the container. In fact, you should dust the board you stick in your oven, too, if you’re making bread that way.

Then you don’t rip up your new loaf trying to take it out of the oven and laying it out to cool.

What type of flour do you use to dust?

In general, bread flour is used for dusting even if you’re making cookies, cakes or pastries. The higher protein content in bread flour gives it more even coverage. Pastry and cake flour also have more lumps in them due to their high starch content.

That often results in the dust sticking to the bread and messing it up.

If you’re dusting loaf baskets, you can use rice flour in place of bread flour. However, a mix that is equal parts of rice and bread flour is better. However, you can use wheat bran or rye flour to dust the basket and give the bread a distinct rustic character.

If you want softer bread, you’ll need to brush the top with butter. There’s no point in dusting the top of the loaf in this case. However, you can put the soft buttered bread on a floured cloth for proofing or letting the bread cool. Just recognize that the dust will shake loose when you pick up the basket and carry it to the table.

If you’re dusting a bowl or board for baking bread on while in the oven, you can use cornmeal for this – especially if making cornbread.

How does dusting bread with flour relate to stenciling?

Fancy loaves of bread may be “floured” with a stencil. The stencil is held over the top of the bread. The surface of the bread is floured with flour or even cocoa powder. It is then baked. The stencil prevents the flour or powdered spice from landing on the bread except through the stencil. This lets you create a unique, literally baked in signature in your breads.

You can buy pre-made stencils or make your own. High-end bakers may have special ones made out of plastic. You can make your own out of wax paper. You’d simply cut out the design, lay or hold it over the bread dough, and then flour the bread.

Remove the stencil by pulling it vertically, leaving the flour or spices behind. Be careful not to design your pattern when transferring the bread to the oven.

Note that you can stencil the bread with chocolate, cinnamon or other spices on top of a layer of bread flour. You can score the area around the stencil, but that’s a matter of taste. This is certainly easier than scoring bread and hoping you don’t dry it out.

Can you dust the bread and score it?

Scoring is best demonstrated with the standard loaf of French bread. The deeper gashes in the bread create a contrast between the white interior and the dark crust.

Bakers often dust the top of the loaf before they score it to maximize the contrast between the dark crust and the white interior. In these cases, white rice flour should be part or all of the flour used for dusting. Its higher scorch temperature gives it a bright white color that contrasts starkly with the dark, baked crust.

Deeper scores are used to shape the way the bread expands. For example, center cross cuts that go deeper than surface scores cause the center of the bread to rise dramatically.

Lesser scores simply make the bread look more interesting while creating spots that capture more butter and jelly than the rest of the loaf. However, you can wipe off the dusting of flour before you score.

That gives the bread a cleaner look, and that maybe the intent if you’re scoring the bread. However, this won’t affect the taste of the bread.

Be careful of applying a thick layer of flour dust to try to cover up the blistered or burned crust. Add a lot of flour dust in this case, and it will look and taste bad.